Our mission is to supply high quality ingredients and semi-finished products for chocolate, confectionery, bakery -and ice cream applications.

We offer great products & solutions for industry, foodservice and retail.

Through a channel of partners & well-esteemed distributors we are working every day on the worldwide coverage of our products.

By daily monitoring quality and continuously working on new innovations we aim to make HERCO® brand the main reference in the sector.

Chocolate and fillings have been the center of our activity since the establishment of the company. A few years  later another amazing  Belgian speciality – speculoos – has been added to the HERCO® assortment.

The constant drive to satisfy our clients has lead to many further product developments. Now, so many years later, we are able to offer a wide range of products: chocolate,  fillings & spreads, speculoos, toppings & dessert sauces, sugar specialties and dry mixes  & decorations.   HERCO® range of products contains all the solutions you need to create high qualty and delicious food. 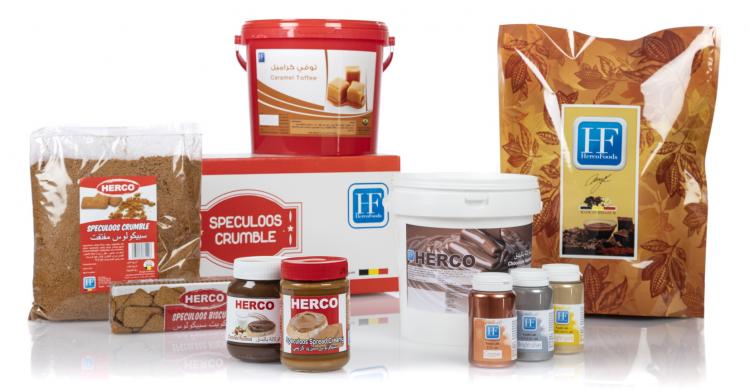 Belgium
the chocolate capital of the world

Chocolate has been our greatest passion.   We are happy to share with you further on the uniqueness of HERCO® chocolate, the history of Belgian chocolate and the amazing process of chocolate making – from bean to chocolate. 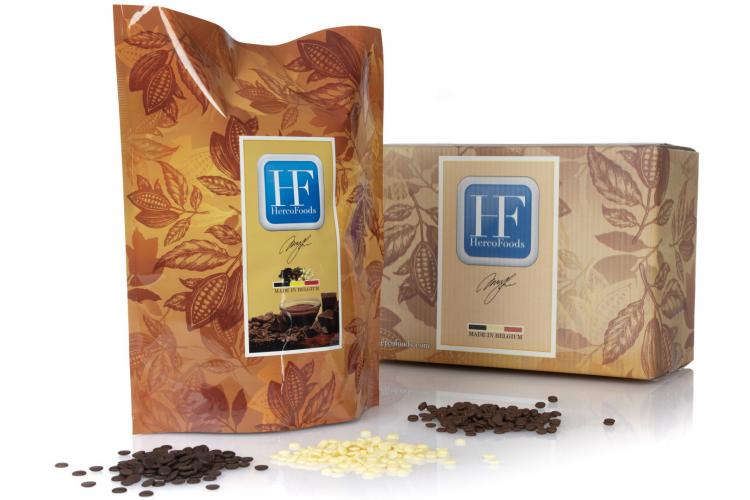 Our chocolate is ground so fine that it has a structure of just 15 to 20 microns.

HERCO® chocolate has a higher cocoa content than most international products.

We have a wide range of chocolate recipes with different cocoa percentages, flavors and viscosity; all developed for specific applications.

The combination of HERCO® chocolate and our assortment of amazing fillings offers endless possibilities for all creative chocolate chefs. 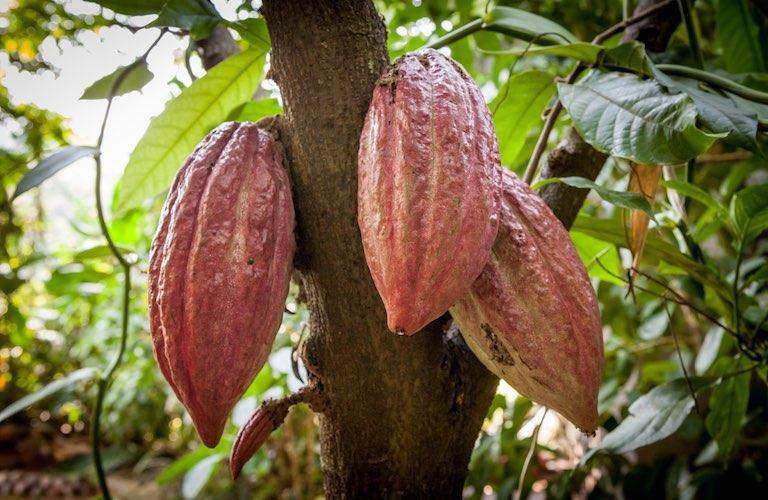 From bean to chocolate

Cocoa beans – a gift from nature handled with great care

The journey of our delicious chocolate products starts from the cocoa tree.

The ideal circumstances for  the cocoa tree are temperatures above 25°C,  humidity more than 80% with lots of rainfall and available shade.  Such climate can be found around the equator, namely in Ivory Coast, Ghana and some countries in Asia & South America.   The flowers of the cocoa tree grow into cocoa fruit, called pods.  Harvesting of the ripened pods is done by handpicking to avoid damage to fruits and trees.  Around 20 – 40 cocoa beans are removed from each pod.  The cocoa beans are naturally fermented to stimulate the chocolate flavour precursors.  Then the cocoa beans are dried to reduce the moisture level below 7% and to stop the fermentation process.   By crushing the cocoa beans the shells and cocoa nibs are separated.  In the next step the cocoa nibs are roasted, which is essential for developing the chocolate taste and then grounded which results in a cocoa mass.   Before grounding, cocoa nibs from different origins  might be mixed to create a unique chocolate recipe blend.  By pressing the cocoa mass is separated into 55% cocoa butter and 45% cocoa powder. 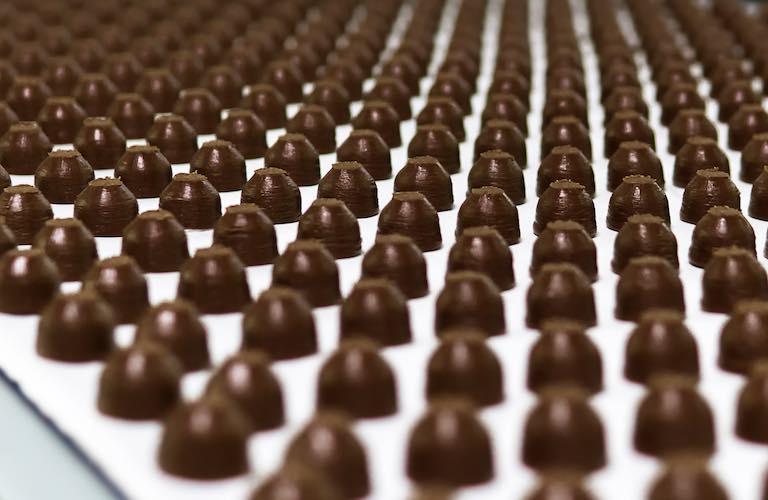 The actual chocolate making starts by blending all ingredients to obtain the chocolate mass.

For dark chocolate are principally used cocoa mass, cocoa butter, sugar and vanilla.  Milk chocolate contains also some milkpowders and white chocolate does not have any cocoa mass.  Then the refining of the chocolate mass starts.  This grinding process consists of 2 steps:  firstly refining up to 150 microns and in the second phase refining up to 15 microns.  This sophisticated refining process is one of the main reasons which make our Belgian chocolate so superior in quality and mouthfeel.  Subsequently the conching process starts to achieve a perfectly even structure and to create the desired, typical taste of Belgian chocolate.  If necessary the viscosity of the chocolate can be adapted by adding cocoa butter.  As a last and important step the chocolate is tempered.  This means the chocolate is subjected to a temperature cycle which crystallizes the butter and gives it a stable form.    By tempering the chocolate keeps a nice shine and good melting properties are ensured.  Now the liquid chocolate is ready and can be sprayed or moulded into the desired form (drops, chips, curls, blocks, etc …)  The chocolate is cooled down to harden, packed and ready for delivery, further usage or direct consumption.

The history of Belgian chocolate

Throughout the centuries, Belgium has built an excellent reputation for the art of chocolate making.

It all started in the 17th century and today more than 725.000tons of chocolate are annually produced in Belgium.

The first signs of chocolate trading appeared in the 17th century.  Chocolate making was then mostly a sideline of pharmacists who sold it as a tonic.  In the 19th century the first pressed chocolate tablets, pastilles and figurines were sold.  The 20th century marked an important period for Belgian chocolate.  Four important inventions mark the history of Belgian chocolate: the invention of the praline and the ballotin, the introduction of the chocolate spread and the development of the transport of liquid chocolate.  Also during this period the first filled chocolate bar with praliné was launched. 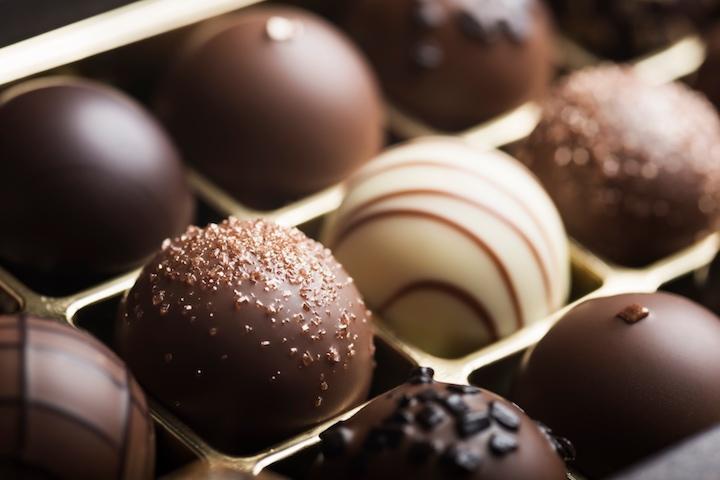 How can we help you?

Do you need specific ingredients for production, a custom-made semi-finished product for a new development or a product with superior taste ?
Please let us know,  our dedicated salesteam will be glad to assist.